Home » Antisemitism/Anti-Judaism » A look at G. K. Chesterton and Oscar Levy on the “169th birthday” of the philosopher Friedrich Nietzsche

A look at G. K. Chesterton and Oscar Levy on the “169th birthday” of the philosopher Friedrich Nietzsche 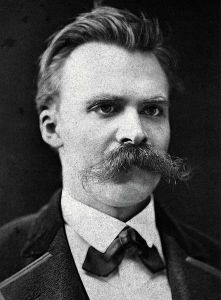 As Heather Saul in the Independent observes, today’s “Google Doodle” (15/10/2013) celebrates the “169th birthday” of the philosopher Friedrich Nietzsche. As G. K. Chesterton’s “holiness” and “antisemitism” are currently being discussed and debated in various internet forums, it seems an opportune moment to look at some of his exchanges with Oscar Levy, a prominent German Jewish Nietzsche scholar in the early twentieth century.

Oscar Levy was probably the main advocate of Nietzsche’s ideas in Britain during the early decades of the twentieth century (he settled in Britain in the 1890s and he described himself as “a Nietzschean Jew”). Like Nietzsche, he was also deeply critical of Judaism and Christianity. According to Professor Dan Stone, Levy’s essential position was as follows: “modern European society is degenerating because it is bound to an effete moral value system; these effete values derive from Judaism”. Levy argued that “this Jewish ethic was taken a step further by Christianity, which is a ‘Super-Semitism’” [1]. Following Nietzsche, Levy argued that Christianity was a development of Judaism, and that both were manifestations of a slave mentality. According to Levy, “the Semitic idea has finally conquered and entirely subdued this only apparently irreligious universe of ours.” He stated that “it has conquered it through Christianity, which of course, as Disraeli pointed out long ago, is nothing but ‘Judaism for the people’” [2].

Clearly Levy and Chesterton could not have been more diametrically opposed to each other when it came to their views on Nietzsche (and Christianity). Chesterton dismissed Nietzsche on a number of occasions as a raving madman; Levy celebrated Nietzsche as a clear-sighted diagnostician. However, they shared one thing in common: they both viewed and portrayed Bolshevism with concern if not disdain. Their essays and articles were peppered with disparaging remarks about Bolshevism, and they both suggested that Bolshevism was a Jewish movement. Discussing “the Jewish element in Bolshevism,” Chesterton argued that “it is not necessary to have every man a Jew to make a thing a Jewish movement; it is at least clear that there are quite enough Jews to prevent it from being a Russian movement” [3]. He stated that “there has arisen on the ruins of Russia a Jewish servile State, the strongest Jewish power hitherto known in history. We do not say, we should certainly deny, that every Jew is its friend; but we do say that no Jew is in the national sense its enemy” [4].

When Levy argued that Bolshevism was a Jewish movement, Chesterton and Belloc at first believed they had found a Jew they could identify with and support. They either ignored or did not notice his criticisms of Christianity. When the British Home Office arranged for Levy to be expelled from Britain, they argued that the Jews had arranged it in revenge for his deprecating remarks about Judaism. Belloc wrote in The Jews in 1922 that “the case of Dr. Levy turned out of this country by his compatriots in the Government for having written unfavourably of the Moscow Jews will be fresh in every one’s memory” [5]. Referring to Dr Oscar Levy, Chesterton stated in 1926 that he had “a great regard for him, which is more than a good many of his countrymen or co-religionists can say.” According to Chesterton: “He is a very real example of a persecuted Jew; and he was persecuted, not merely by Gentiles, but rather specially by Jews. He was hounded out of this country in the most heartless and brutal fashion, because he had let the cat out of the bag; a very wild cat out of the very respectable bag of the commercial Jewish bagman. He told the truth about the Jewish basis of Bolshevism, though only to deplore and repudiate it” [6].

After supposedly defending Levy from the Jews, Chesterton must have felt a little disappointed with Levy’s reply. Oscar Levy wrote to Chesterton, pointing out that he was not driven out of England by Jews at all, that the astonishing thing was that his statements about Jews and Judaism had “created so little stir amongst them,” and that the Jewish Chronicle and Jewish World had supported him against the decision by the Home Office [7]. Levy argued that Bolshevism was more closely related to Christianity than to Judaism. In this he was of course constructing a caricature of Christianity and so-called Christian Bolshevism in much the same way that Chesterton caricatured Jewish culture and so-called Jewish Bolshevism. He denied that “these Russian Jews, who are Jews in race, are also Jews in spirit.” “They are not,” he concluded, “they are really Christians. The Jewish mind has a great affinity to Christianity: the first Christians were one and all Jews, and these latter-day Jews are likewise all imbued with the Christian Spirit (though they themselves are entirely unaware of this). But the Jew on the whole is not a Christian …” According to Levy, “the doctrine of the Bolshevists is then – au fond – a Jewish doctrine, in as much as Christianity is a Jewish creed.” [8].

The idea that the Anglo-Jewish community pulled the strings of the Home Office to arrange for Levy to be removed from Britain was simply a Bellocian and Chestertonian antisemitic invention. In fact it was not only the Jewish Chronicle and Jewish World (the two most prominent Anglo-Jewish newspapers at the time) that argued that Levy should be allowed to stay. The other prominent Anglo-Jewish newspaper, the Jewish Guardian, also defended his right to stay in Britain. The Jewish Guardian expressed relief that the Chief Rabbi added his name to the appeal to allow Oscar Levy to stay. The Jewish Guardian did not admire Oscar Levy’s views or his decision to write a preface for George Lane-Fox Pitt-Rivers (an antisemitic conspiracy theorist), but it did not believe that it was right for an Act of Parliament to be administered against Levy on the basis of his philosophical theories [9].

Notes for A look at G. K. Chesterton and Oscar Levy on the “169th birthday” of the philosopher Friedrich Nietzsche